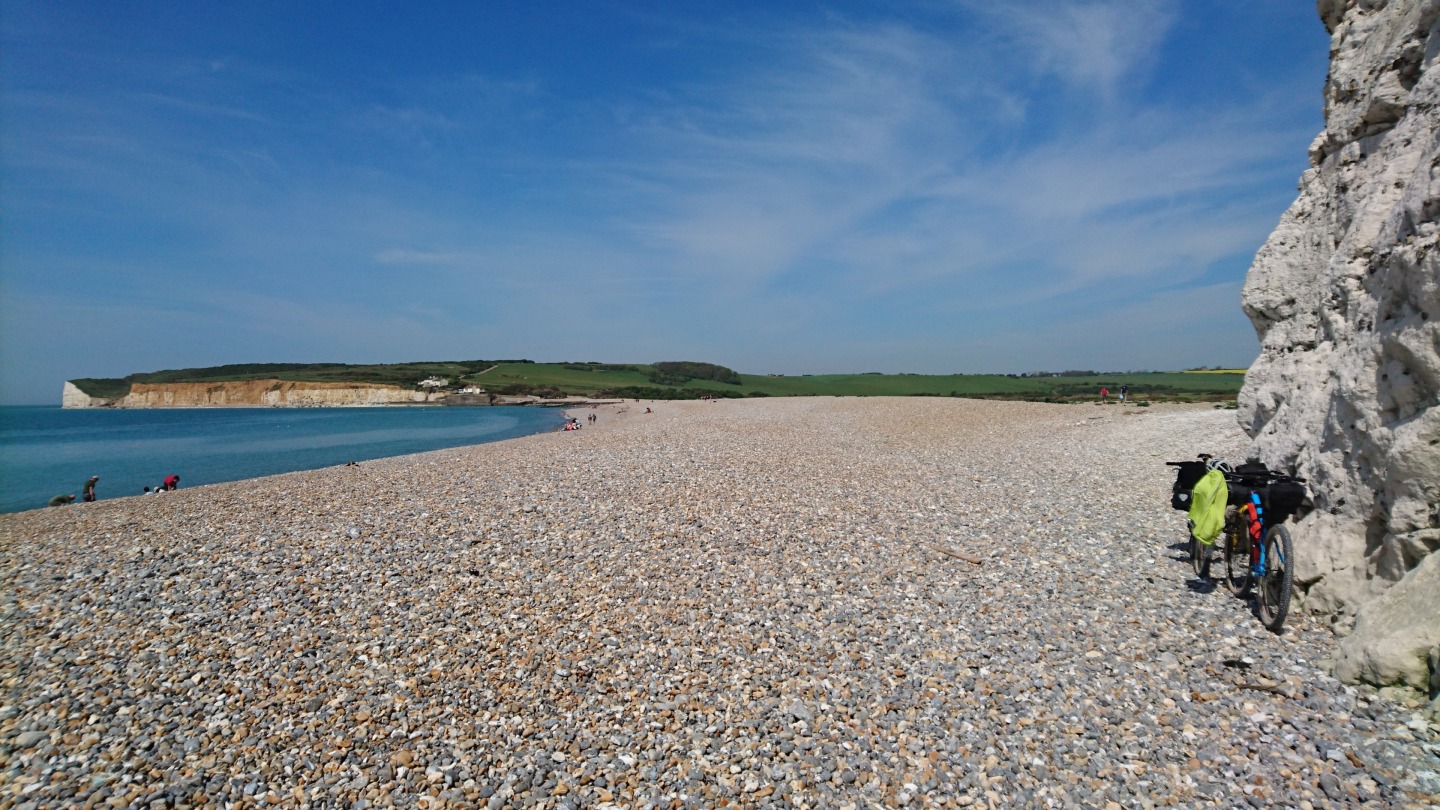 With less than a month to go before we leave for New Mexico, time was rapidly running out to get some practice in. Most peoples first question when they hear you are doing a trip like this is how you will cope with the riding, ‘how’s the training going?’ and ‘how far will you have to do each day?’ followed by a sharp intake of breath or (if it’s my Dad) a description of what they expect my backside to look like afterwards. But I wasn’t bothered about the riding, and that isn’t what the trip is about. It’s about the journey, the getting away from everything, the ability to carry everything we need for two months and nothing more.

As we both work in the industry, constantly surrounded by and talking about bikes, we clock up enough miles commuting and riding for fun to keep in good shape, but it’s the equipment we need, how we’re going to carry it, and how we’re going to use it that worries me the most.

I had hoped to have a trial run a bit earlier in the year, but work, weather, and life kept getting in the way. Last weekend though, with 20+ degrees forecast, no rain or wind, I couldn’t wait to get out into the woods! The morning started off in Brighton, selling my (London dwelling) sister a bike who I would love to encourage off the tube, and picking up some last minute supplies. I knew there was no point heading out early as it wouldn’t be dark till gone 8pm, so there was plenty of time to get ready. Home by mid afternoon, we casually started packing, unpacking, repacking, searching for lost gear, and the enormity of what we were planning on doing at the end of the month started to dawn on me. I started to feel pretty stressed out thinking of every possible situation and what we might need to take, so with the sun shining and perfect weather, I took a break and sat in the garden with a cold beer. Half an hour later I was raring to go again, we finished loading the bikes, rode in a circle round the garden a couple of times, and after months of dreaming we were ready.

Normally from our house we would ride straight up to ‘the masts’ a pair of radio towers on the South Downs Way ridge between the River Ouse and Firle Beacon, although barely 200m high, it’s a steep climb and starting at pretty much sea level it’s not-that-impressive elevation would surprise many a rider unaware of the undulations that exist in this corner of Sussex. Anyway, although we feel very lucky to live this close to such nice scenery, as this was our first trip fully loaded, we decided to take it easy and head along the much flatter Old Coach Road, a gravel byway that joins Firle and Alfriston along the base of the downs.

Manoeuvering the bikes round to the front of the house was significantly more difficult than usual, and we paused on the steps for a quick photo before le grand départ. A few tentative pedal strokes down the road and we were off, I had been concerned about what the bikes would feel like with the extra weight, but I was immediately thinking ‘this isn’t that bad’, we quickly adjusted to taking it easy, staying seated and spinning gently it felt pleasantly efficient, no doubt helped by the optimal weather!

We cruised away in the evening sunlight, eased into the journey with the smooth tarmac gradually giving way to broken country lanes and the gravel coach road. Gently ambling along flanked by golden fields of rapeseed we couldn’t have hoped for a better start to our ‘training’ and the stresses felt earlier in the day seemed like a distant memory. There was a brief hiatus when Magda’s bottle cage rattled loose, but lesson one was learn’t – don’t keep your multitool hidden in the bottom of a bag! The coach road continues for several miles until we were back on tarmac to cross the Cuckmere valley at Lullington, where the open farmland meets Friston forest. The forest holds special memories for me as the place I started mountain biking nearly 20 years ago, it’s not a huge area, but the combination of stunning coastal scenery, mixed woodlands and DIY flowing singletrack make it a place I’m proud to feel at home in.

We stuck to the fireroads at first, I didn’t have a clear plan, just a couple of spots in mind where we could set up camp. We rolled along for a mile or two, then turned off up a steep chalk climb to find somewhere a bit more off the beaten track. It didn’t take long before we noted we were spoilt for choice, and settled on a pleasant clearing in the sycamore trees that I hoped would be a good point to catch the rising sun the next morning. With the light starting to fade and hunger setting in, we unpacked and cooked our first camp meal, a simple stir fry of rice and vegetables, as always when cooked under the sky it was delicious! Darkness was now taking hold so we got the tent up, and made a small camp fire to complete the experience. I’m sure I’m not the only one to experience this, but something about being able to carry everything you need to survive the night, setting up camp, then relaxing with nothing to do except stare into the burning embers makes me feel incredibly content. Reflecting on the day, our first loaded trip out was a success. Although neither of us had much experience at bike packing/touring it’s something I’ve wanted to do for so long that as I had rehearsed everything in my head so many times, and spent countless hours researching the right gear, everything just fell into place.

Tiredness was now taking over and we retired to the tent for the next test. Our tent is a Vaude Taurus Ultralight, compact and light at about 1.75kg, having only slept in it solo before my concern was lack of space but we managed ok. I was dozing off pretty quickly, but with Magda’s first night ‘under canvas’ in many years, the sounds of the forest were a bit distracting. I didn’t mind the Owls, falling leaves, snuffling animals (no bears in Sussex right?), but I must admit the sound of a heavy truck passing close by had my heart racing. We were a fair distance from any road, but I guess it was farm machinery or a forestry truck using one of the fireroads, unaware of our fledgling adventure hidden in the trees.

I don’t think either of us had the best nights sleep, but considering it was the first attempt it wasn’t bad. We awoke to the morning sun breaking through the trees, and set about making porridge whilst the sounds of the first Sunday riders could be heard tearing though the trees. It didn’t take too long to get packed up, and full of confidence we set off down the singletrack rather than taking the easy gravel road out. This was certainly made easier by being a good 5kg lighter, but I was surprised by how much water we had got through in just one night in relatively cool temperatures. My friend Patrick’s words about running out of water in the Chihuahuan desert were ringing in my head.

Luckily we weren’t in the desert today, and it was only a couple of miles to the Cafe at Exceat, for a coffee and cake with a sea view. Now was time for lesson two – pushing a loaded bike while trying to hold a hot beverage in one hand and delicious pastry in the other is a pointless and painful task! It must have been about 10am by now, we had no plans for the day other than to make it home at some point, but as it was clearly going to be a stunning weather once again, we decided to get a few more miles in first. We headed down to Cuckmere haven, a hidden gem of unspoilt beach and river estuary on the south coast between Eastbourne and Seaford, despite the Sunday morning crowds making it slow going I knew it would be worth it. I grew up just over the hill from this spot, but it still impresses every time. The smooth rolling grassland, suddenly cut off by the towering white cliffs of the Seven Sisters, sheltering secluded beaches and the river that can be forded at low tide to reach Hope Gap all make this a wonderful place. 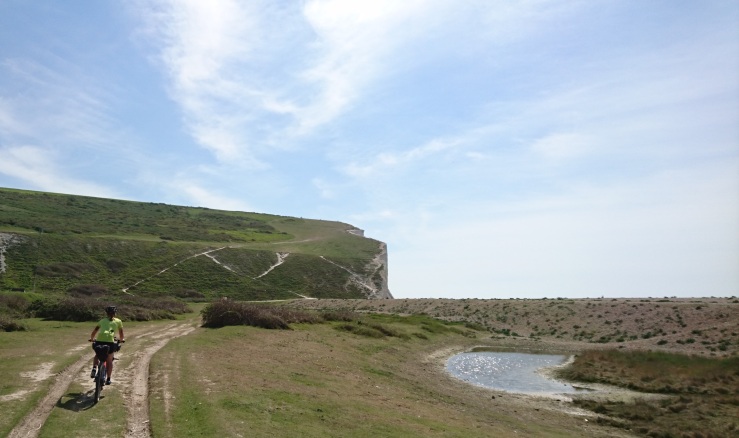 I briefly contemplated my first swim of the year, but with the prospect of 20 miles home in damp bib shorts, and sea temps still on the bloody freezing side of ‘a bit nippy’ I decided against. After a few minutes taking in the sea air, we continued back into the forest, and over to the edge of Eastbourne to get some more miles in our legs. Once again I was struck by how easy the riding was, the bikes felt balanced but despite the loads, still nimble. We reached Butts Brow, on the last ridge of the downs before they disappear to give way to Eastbourne, and the Pevensey levels. Hunger was now starting to build, and with no supplies left we decided to make the most of the abundance of country pubs and head back along the South Downs Way to find some lunch. The route took us on a fantastic descent into Jevington, a fast and wide farm track that had me wanting let the brakes go and find the limits of a rigid bike with panniers! The constant risk of an errant flint or slippery chalk ruts sending me off course had me back off slightly, but on the second descent of the morning, and one of my favorites off the Long Man of Wilmington, adrenaline got the better of me with a front pinch flat reminding me to take things easy.

At the bottom of the hill we rolled along to the Sussex Ox, a pub I’ve not been to for years, but was recommend recently. It didn’t disappoint with excellent food, views, and a cold pint of Burning Sky refreshing me nicely. I kept reminding myself that touring through America would not have the same luxuries, and not to get too comfortable!

Now on the final leg home, the masts in sight, we were so lucky to have had the perfect first bike packing experience, but perhaps it would not ready us for what could take place? Weather, mechanicals, lack of supplies could all make the experience a very different story and we would be foolish to forget that.